Proteas Women off to an impressive start 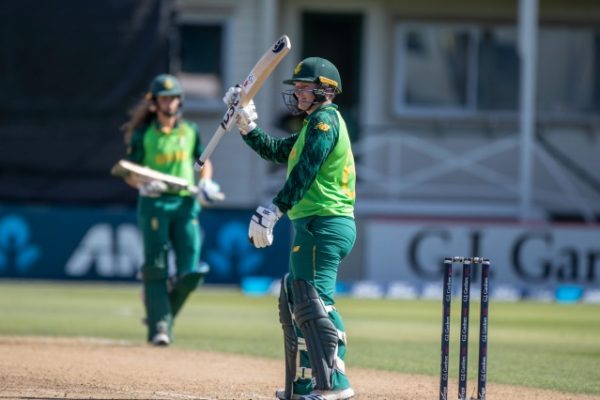 25 Jan Proteas Women off to an impressive start

A brilliant opening stand of 163-runs from Lizelle Lee and Laura Wolvaardt has led the Proteas Women to an emphatic victory over New Zealand Women in the first one-day international (ODI) clash at Eden Park outer field on Saturday.

After a few disappointing results to end 2019, Lee ensured it was a vastly different story this time around, striking 99 from 99 deliveries to chase down the White Ferns’ 9-259 with nine balls to spare and take a 1-0 lead in the series with two ODI matches remaining.

She was ably supported by the ever impressive Laura Wolvaardt, who scored 91 runs off 124 balls as the Proteas Women cruised home with seven wickets in hand.

After a strong start, New Zealand women looked on course for a score in excess of 300, but instead of consolidating they kept losing wickets in key stages of their innings and were grateful that K Perkins enabled them to reach a challenging total of 259 after contributing a gritty 78 from 83 balls.

Needing 260 to win, Proteas Women reached their total with nine balls to spare. Lizelle Lee was in sparkling form as she helped the visitors to the perfect start scoring with ease to the delight of a few South African fans who were in attendance at Eden Park. On a good batting pitch, runs continued to be plundered with South Africa reaching a third highest opening stand in ODI cricket of 163 before Lee lost her wicket on 99 to Jensen.

Wolvaardt soon reached her 16th fifty in ODIs with a high proportion of boundaries (nine fours) as the team raced to 200 with eleven overs to go and were well in control.

After losing the wicket of Sune Luus for 15, the experience of Wolvaardt and Dane van Niekerk 37 (43) who was playing in her 100th ODI match saw the Proteas reach their target with ease a feat the Proteas skipper was happy with.

“I was very happy with how we played today, especially chasing like we did against a strong New Zealand side and also to show what we can do as a team,” van Niekerk said after the match.

From the start of the tour there was a keen focus on partnerships and someone batting through the innings like Laura did, so once the openers got in we knew we were in with a shot. It was an emphasis on that and trying to take on the field and rotate the strike as much we can. Hopefully we can carry that into the next game on Monday.”

South Africa Women will look to keep the momentum going when they come up against the same Ferns on Monday, 27 January in the second ODI in Auckland.