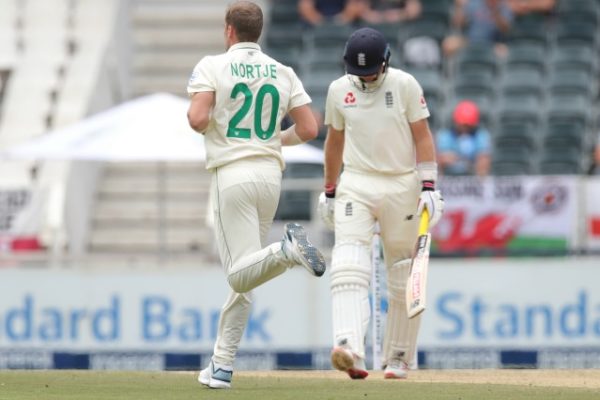 ANRICH NORTJE provided a lone ray of light with his first career fifer as the Standard Bank Proteas crumbled against a vastly superior England outfit on the second day of the final Test match at the Imperial Wanderers Stadium on Saturday.

Nortje has clearly been South Africa’s find of the series and his whole-hearted return of 5/110 in 24 overs was well deserved as is the fact that he is the leading wicket-taker in the series.

For the rest it was totally England’s day as they amassed a first innings total of exactly 400 and then had the Proteas in tatters at 88/6 in their reply with Quinton de Kock once again the only batsman to show any real confidence.

England’s above part total on a good pitch but one on which the bowlers always knew they were in with a chance was built in the first place around the century stand between Joe Root and their own find of the series, Ollie Pope, whose positivity contrasted sharply with the defensive approach of most of the South African batsmen.

The killer blow was then struck by tail-enders Mark Wood and Stuart Broad in a 10th-wicket stand of 82 in less than 10 overs.

By that time Nortje had bowled himself to a standstill after a mammoth morning spell of eight overs leading up to the second new ball and the rest of the attack took a hammering.

England now take a lead of 312 runs into the third day and the Proteas face the prospect of having to follow on for the second time in a row.

An equally worrying statistic that to date this is the first time in a home series that the Proteas have failed to score a century. It will be up to De Kock to correct that statistic tomorrow.