Paterson the pick of the Proteas rookie 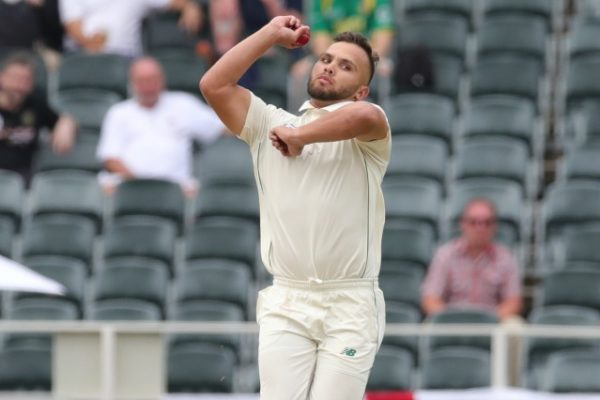 24 Jan Paterson the pick of the Proteas rookie

THE Standard Bank Proteas rookie pace attack took a session to find their feet but then turned the game back their way in the second session on the opening day of the final Test match against England at the Imperial Wanderers Stadium, Johannesburg, on Friday.

On a day that was shortened first by rain and then by bad light to 54.2 overs during which England scored 192/4 the match could be said to be fairly evenly balanced although the visitors’ great strength throughout the series has been the ability for the remaining wickets to score substantial runs, boosted by a century by the likes of Ben Stokes and Ollie Pope.

The good news for the Proteas that Stokes is already back in the pavilion, but Joe Root and Pope are not and a lot will depend on some important strikes early on day two.

With Vernon Philander going into his final Test match with 222 wickets to his credit, he was backed up by four bowlers who had taken 18 Test wickets between them with one of them, Beuran Hendricks, being on debut, the 110th first-timer for the Proteas since unity in this format.

This was the result of Kagiso Rabada missing the match through suspension and the selectorial decision to leave out Kesh Maharaj and field an all-seam attack. It removed two bowlers who had taken more than 300 wickets between them. Both teams, in fact, opted for this all-seam policy with Dom Bess also sitting on the sidelines to make room for Chris Woakes.

Jofra Archer failed to come through his fitness test.

And the inexperience of the Protea attack showed in the first session on a perfect batting deck after Root had won the toss for the fourth time in a row. Dominic Sibley (44 off 93 balls, 7 fours) and Zak Crawley (a career best 66 off 112 balls 11 fours) helped themselves to exactly a century partnership off 30 overs in the opening session which took place between the re-adjusted lunch and tea intervals.

But the second session leading up to the close swung right back in South Africa’s favour as they took 4/92 in the remaining 24.2 overs.

Hendricks got the show going with his maiden Test cricket to have Sibley once again caught down the leg-side and the four wickets were shared around between the four frontline seamers.

Dane Paterson was the pick of the bunch and deserved better than his 1/39 in 13 overs. The Wanderers is the sort of surface that will always suit him, and he is learning very quickly what Test match cricket is all about.

He will never be the match of Philander as an all-rounder, but he can certainly fill the bowling role that Philander has occupied so flawlessly for so long.