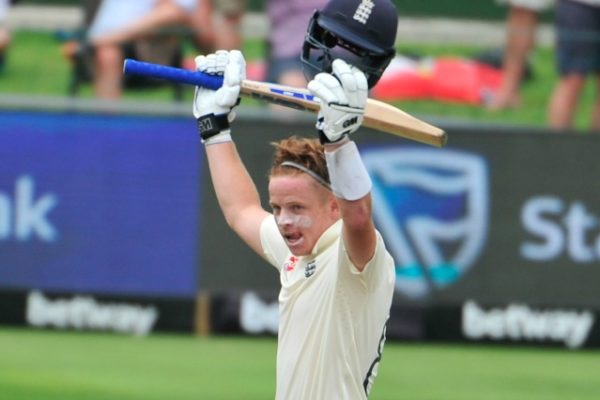 OLLIE POPE stepped out of the inevitable shadow of Ben Stokes to score his maiden Test century and share a double-century partnership with England’s champion that gave them a commanding first innings total on the second day of the third Test match against the Standard Bank Proteas at St. George’s Park, Port Elizabeth, on Friday.

The pair enabled England to declare one run short of 500 – the fourth highest innings total at this venue – leaving the Proteas with a tricky 26 overs to face before the close on a day that was extended after overnight rain delayed the start of play by 45 minutes.

Only 18 overs were possible before rain and bad light brought about stumps but it was time enough for Dom Bess to dismiss both Pieter Malan and Zubayr Hamza and leave the Proteas on 60/2, still trailing by 439 runs.

Hamza was unlucky to the extent that his dismissal came only 3 balls before play was called for the day.

Both England batsmen scored centuries with Stokes making his ninth at this level and his third against South Africa on his way to 120 (214 balls, 12 fours, 2 sixes) and Pope finishing unbeaten on 135 (226 balls, 18 fours and a six) and the significant factor was that the youngster contributed equally to the partnership of 203 for the fifth wicket that came in 59 overs and was a ground record stand.

England have clearly found themselves a new star who has locked down the vacant place in the middle-order alongside Stokes and Joe Root.

For the Proteas to get back into the game they needed to strike early and regularly on the second morning but it was not to be as the two batsmen scored 70 runs in the first hour at the rate of 6 to the over.

After his subdued batting in the team interest on the first day Stokes wasted no time in trying to get after Keshav Maharaj while Pope impressed with the quality of his off-side game that saw him find gaps in the field either in front of or behind square. In many ways he looked like a young Peter Kirsten which is fair testimony to his talent.

For the second day in a row the morning session did not bring a single wicket but again the Proteas had their best spell after lunch when they took 4/91 that included Stokes (Dane Paterson’s maiden Test wicket) and Sam Curran although not before the latter had contributed the bulk of the 59-run partnership for the seventh wicket.

At 426/8 the Proteas must have been reasonably pleased to have put a brake on the England batting line-up but there was still pain to come as Mark Wood came out to join Pope after tea and contributed 42 off 23 balls (2 fours and 5 sixes) to a ninth wicket stand of 73 off 53 balls before Wood’s dismissal brought about the declaration.

It gave Maharaj a more than well deserved five-wicket haul (5/180 in a marathon 58 overs) – his 6th in his Test match career.

The centuries by Stokes and Pope followed that by Dom Sibley at Newlands which puts England 3-0 up in terms of three-figure contributions in the series to date and there is some catching up for the Proteas batsmen to do for their team to remain in contention in the series.