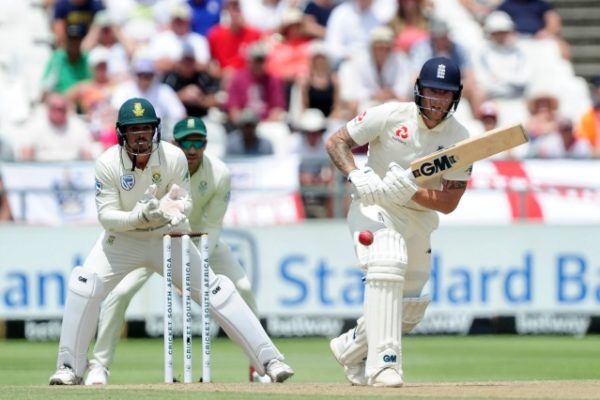 BEN STOKES launched a memorable blitz on the Standard Bank Proteas to effectively take any chance of a home win out of the equation on day four of the second Test match at Newlands on Monday.

The England’s all-rounder’s onslaught was as unorthodox as it was effective as he shared a partnership of 92 with Dom Sibley and contributed 72 off the runs scored off just 47 balls with 7 fours and 3 sixes.

His 50 came off 34 balls (5 fours and 2 sixes) with only the legendary Sir Ian Botham having scored faster half-centuries in Test cricket for England.

His innings rather overshadowed the maiden century from Sibley who finished unbeaten on 133 (311 balls, 19 fours and a six) but which also played an important role as he laid the foundation for the all-out attack that followed both from Stokes and Jos Buttler.

When Joe Root did declare half an hour after lunch, he left the Proteas with a world record target of 438 in a minimum of 146 overs and although the number 438 has happy memories for the Proteas and their fans it is not really a practical proposition.

The Proteas made a steady start to their reply with Pieter Malan and Dominic Elgar putting on 71 for the first wicket – the first half-century opening partnership for the Proteas in almost a year.

There was a further stand of 52 between Malan and Zubayr Hamza for the second wicket but the Proteas were still left needing a further 312 for victory on the final day with 8 wickets in hand.