The old firm bowls England back into series 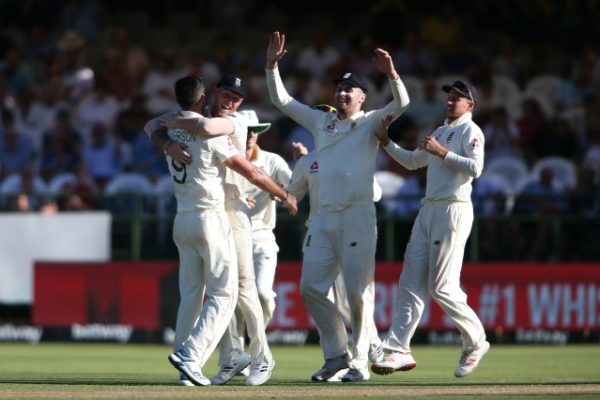 04 Jan The old firm bowls England back into series

THE old firm of Jimmy Anderson and Stuart Broad took charge as England bowled themselves back into the series and an almost certain first innings lead on day two of the second Test match against the Standard Bank Proteas at Newlands on Saturday.

The Proteas finished the day on 215/8, still 54 runs in arrears with only Kagiso Rabada and Anrich Nortje left to bat with Vernon Philander.

Just how significant England’s likely first innings advantage will be remains to be seen but bearing in mind that this has been an unusually low scoring New Year Test match with 18 wickets having fallen for less than 500 runs it looks like being important.

After England had managed to extend their first innings by a further seven runs on the second morning before last man Anderson was dismissed it was then the veteran new ball attack that took charge, reducing the Proteas to 40/3 with their captain, Faf du Plessis, among those already back in the pavilion.

It ensured that the visitors won the first session and they won the last one as well when they took a further five wickets for 58 runs. The Proteas won the middle session when Dean Elgar (88 off 180 balls, 10 fours) and Rassie van der Dussen (68 off 187 balls, 7 fours) made the bulk of the runs that made up their 117 runs for the fourth wicket.

This is by far the biggest partnership of the match to date being more than double the 58 runs that Ben Stokes and Ollie Pope had managed the previous day.

If Anderson and Broad were the heroes of the day, a lot of credit had to go to the rookie spinner, Dom Bess, for blocking up one end in much the same way that Keshav Maharaj had done on day one, and by no means least the acrobatic brilliance of Stokes in the slips which resulted in four catches going his way.

There were one or two that went astray but there are very few players in world cricket who would have got near some of the chances he created.

Elgar, having had to bat on snake pit pitches for nearly all his home Test matches over the past two seasons, will have been mortified to give his wicket away when his third Newlands century and his third against England was his for the taking.

His dismissal, along with that of Quinton de Kock with both batsmen being caught on the sliced drive, opened the way for England to strike again in the five overs that were available before the close with the second new ball.

A four-day Test match looks very much on the cards.

The day’s cricket added a further R107 000 to the takings for the Sunfoil Education Trust (SET) as a result of boundaries and sixes hit and wickets taken by both sides. It brings the running series total to R367 000.