Nortje claims the big wickets to put Proteas on top 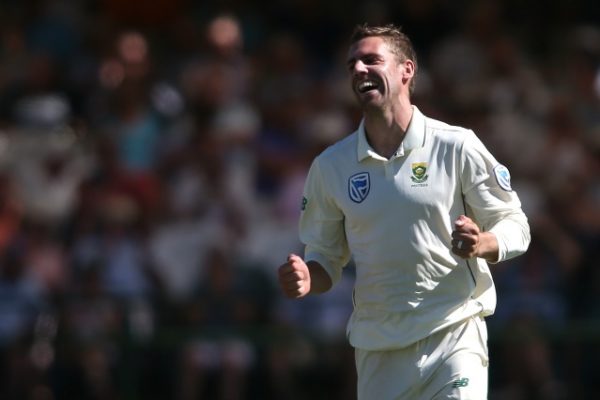 ANRICH NORTJE continued the impressive start he has made to his home Test career by claiming the key wickets of Joe Root and Ben Stokes on the opening day of the second Test match against England at Newlands today.

It was a good start to the new year for the Standard Bank Proteas as they came within one wicket of bowling England out for a modest total after the visitors had won the toss for the second time in the series.

Although there was good bounce and carry, particularly for the bowlers operating from the Wynberg end, this was still a very good batting surface and the Proteas can feel well satisfied to restrict England to 262/9 with the wickets largely being shared around by the four seamers who took four wickets each.

Nortje showed again that there is no substitute for sustained straight bowling at fast pace. He, in fact, almost had Root twice in the space of three balls as a catch first went astray in the slips and then he had him caught behind for one of Quinton de Kock’s five catches. The keeper now has 13 dismissals from three innings in the series.

It was a fine team bowling effort by the Proteas once again with Dwaine Pretorius taking two wickets in four overs in an important spell leading up to the second new ball and Keshav Maharaj effectively blocking up one end for much of the day. He was not without reward either as he bowled another key batsman, Joe Denly, while the top scorer of the day, Ollie Pope (56 not out off 132 balls, 7 fours), needed an umpire’s call to survive a South African decision review.

The first two sessions were shared as England scored 67/2 before lunch and 72/2 in the second before the Proteas hard work paid off with 5/113 in the final session.

Pieter Malan became the Proteas 108th Test cap and will get his chance to show his worth on day two.

The Sunfoil Education Trust (SET) which benefits from boundaries and sixes hit and wickets taken by the two sides gained R62 500 from the day’s play to take the series total past the R300 000 mark.