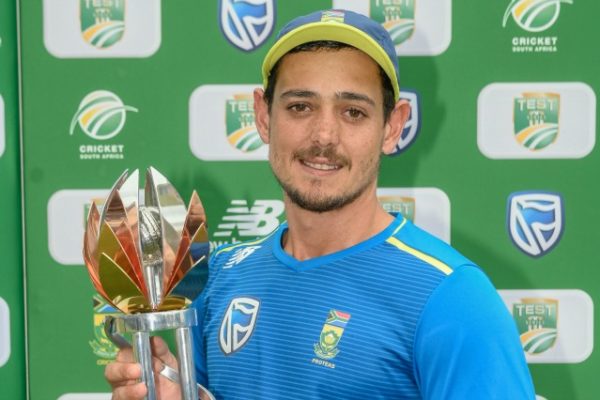 THE Standard Bank Proteas winning performance in the first Test match against England is well reflected in the latest ICC Test match rankings for players.

Quinton de Kock, the Man of the Match and leading runs scorer in the match, is back in the top 10 among the batsmen while Vernon Philander, who was largely responsible for the Proteas taking a match-winning first innings lead, has jumped up to fifth place among the bowlers.

He is also ranked No. 4 among the top all-rounders.

Kagiso Rabada, in spite of taking seven wickets, has dropped one position to No. 3 among the bowlers.

Anrich Nortje has jumped no fewer than 36 places into the top 100 and is now ranked at No. 96.

De Kock finished the calendar year ninth on the runs scoring chart with 713 runs (two centuries) at an average of 47.53 from only 8 matches.

Rabada finished joint sixth on the wickets-taking chart with 33 wickets at 27.39.

“It feels great to be one nil up in the series and to have started the journey to getting back to our winning ways,” commented De Kock. “There’s still a long road ahead, the series is not won yet but I’m glad to have contributed to the team in a meaningful way. It was a really good way to end the year. I’m not really bothered about accolades and rankings, but I’m happy that the team is in a good space and I’m really looking forward to a good new year’s Test in Cape Town.”

Philander goes into the final three matches of his Test career with 1700 runs and 220 wickets at the highest level and has a real chance of achieving the all-rounder’s double of 2000 runs and 200 wickets.

Shaun Pollock and Jacques Kallis are the only two South Africans to have achieved this.