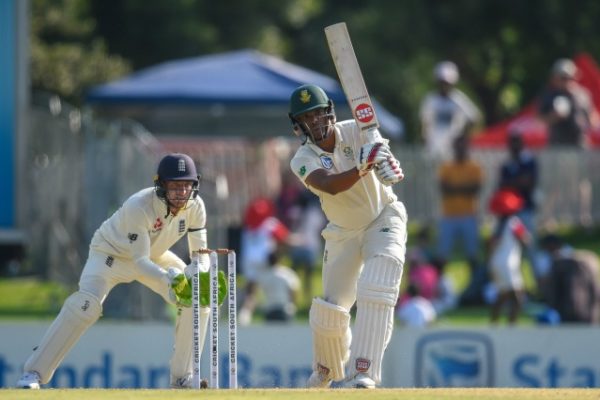 VERNON PHILANDER exploited conditions very much to his liking on his last tour of international duty as he led the Standard Bank Proteas to a significant 103-run lead on the first innings on the second day of the first Test match against England at SuperSport Park, Centurion, on Friday.

England struck back with four wickets when the Proteas batted again but they had nevertheless extended their lead to 175 by the close of play.

Philander was able to get both nip and bounce off a good length to finish with the magnificent return of 4/16 in 14.2 overs, eight of those runs coming in one over as England suffered a horrendous collapse of 7/39.

The tourists had looked to be in a position to challenge for the lead after Joe Denly, who was dropped before he had scored and went on to top score of the innings (50 off 111 balls, 9 fours), and Joe Root put on 55 for the third wicket and then Denly and Ben Stokes a further 72 for the fourth wicket.

The breakthrough at that stage was made by the back-up attack of Dwaine Pretorius, who took his maiden Test match wicket, and Anrich Nortje, who got key wickets in Stokes and Jonny Bairstow. Between them they took 3/8 in the space of 17 balls.

That opened up the lower order to Philander and Kagiso Rabada (3/68) with the latter bowling rather better than his figures suggested. His new ball spell when he dismissed Dominic Sibley, had Denly dropped in the slips and hit Root both in the ribs and on the helmet was right out of the top KG drawer.

The Proteas generally bowled a much tighter line than England had managed on the first day and this was reflected in England taking most of their wickets caught in the slips while Quinton de Kock continued his outstanding match by taking six catches behind the stumps for the South Africans to back up his 95 runs.

The Proteas will be looking to extend their lead beyond 300 with the key roles to be played by Rassie van der Dussen who is currently at the crease with night watchman Nortje, with De Kock, Pretorius and Philander still to come.

With 9 wickets falling on day one and 15 on day two the match is moving forward very quickly.