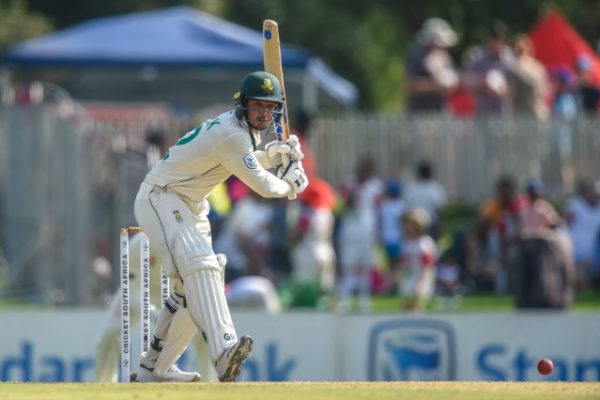 MARK BOUCHER wasted no time in putting his stamp on the Standard Bank Proteas playing style on the opening day of his first Test match series in charge against England at SuperSport Park, Centurion, on Thursday.

In a matter of a couple of weeks he has put the fighting spirit back into his team and has reignited a desire to land the first punch.

The Proteas, on the back of a superb counter-attacking innings of 95 by Quinton de Kock (128 balls, 14 fours), well supported by the two all-rounders, debutant Dwaine Pretorius (33 off 45 balls, 4 fours and a six) and Vernon Philander (28 not out, 76 balls, 5 fours), finished the day on 277/9 after being sent into bat.

How competitive that total is remains to be seen but one would imagine it is pretty close to par with England going into the game with a specialist all-seam attack although Joe Root and Joe Denly contributed seven overs of spare between them.

Sam Curran, who impressed with his intensity, was easily the pick of the attack, taking a career best 4/57 in 19 overs, while Stuart Broad (3/52) was the best of the rest.

The most important changes Boucher has made is to restore confidence to the batting line-up and to balance the side with two lower order all-rounders which meant that De Kock had two proper batsmen as his partners rather than having to shepherd the tail as he has often had to do in the past.

It has been a great year for De Kock in Test cricket. He is one of only seven batsmen to have scored more than 700 runs in the calendar year (at an average in excess of 50 with two centuries and five half-centuries from his 14 innings) and he is one only three to have hit 100 fours.

Boucher himself started his career in an era when the Proteas batting was carried largely by Jacques Kallis, Herschelle Gibbs and Gary Kirsten before the golden generation of Smith, Amla, De Villiers and Prince arrived on the scene and the 90/5 conundrum became a regular feature of South Africa’s top order batting before Boucher, Pollock and Klusener would often more than double the total.

Much the same scenario played itself out today at 111/5 before De Kock and Pretorius (87 for the sixth wicket) and then De Kock and Philander (47 for the seventh wicket) stabilised the position. It goes without saying that Boucher will want the same batting balance going forward.

The regained confidence of the Proteas batting could be seen in their scoring rate of three to the over in the first session and more than four in the second with boundaries making up the high percentage of 65 percent of the total for the day.

There will be disappointment that four of the seven top batsmen got out for scores between 20 and 40 but that was also a reflection on the fact that there was seam, swing and bounce available throughout the day.

This may well a good surface for Philander over the next few days.