Hollywoodbets on board as KZN Women’s team sponsors 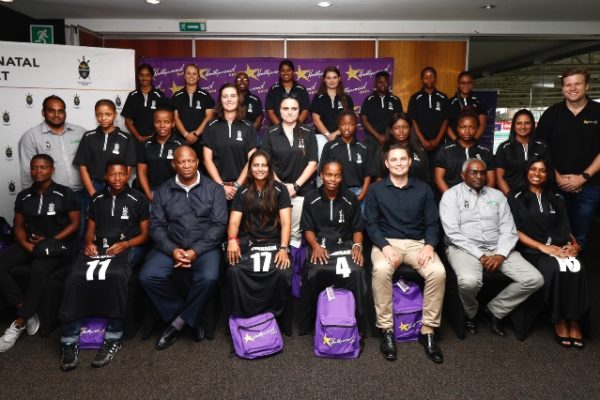 23 Oct Hollywoodbets on board as KZN Women’s team sponsors

Hollywoodbets have become an integral part of cricket in KwaZulu-Natal and they will further entrench their role with the union as they take on the title sponsorship of the KZN Coastal Women’s Provincial cricket team this season.

Recently Hollywoodbets took over the naming rights to Kingsmead Stadium and renewed their relationship with the Hollywoodbets Dolphins and the two semi-professional teams, KZN Coastal and KZN Inland.

Cricket is a passion for Hollywoodbets and their relationship with KZN Cricket has only grown over the years. To have them backing women’s cricket could set an important precedent going forward.

“Hollywoodbets is heavily invested in KZN cricket as can be seen with our sponsorship of the Hollywoodbets Dolphins, and our recent announcement regarding the naming rights of Hollywoodbets Kingsmead Stadium,” Brand and Communications Manager at Hollywoodbets Devin Heffer said.

“We have also provided sponsorship at club level and through our various community initiatives. It is a natural next step to now focus on the women’s game, which has seen a big increase in popularity both in South Africa and internationally.”

With the current trajectory that women’s cricket is taking around the world, the relationship can only help energise the game and grow the sport amongst young girls.

“The KZN Coastal Women’s team has been exceptional over the past season. They have now qualified for the CSA Women’s Provincial League ‘Top Six.’

“This qualification has helped in attracting Proteas to the team, which will not only strengthen their squad for the tournament, but will give that much needed experience to compete at this level.”

“I have been impressed by the passion and commitment shown by our women’s team, and our head coach, Dinesha, is probably the best female coach that I have ever encountered,” CEO of KZN Cricket Heinrich Strydom said.

“This sponsorship and capping function is due recognition for what the women have achieved in a relatively short time frame.

“Our women’s side produced fantastic results and are now in the top six in the country. We want to use that momentum to grow the game in the province.

“With the backing of Hollywoodbets I can see the confidence amongst the players in our women’s team growing.”

Chloe Tryon was the last women to earn a Proteas cap while playing for KZN when she made her T20 debut in 2010, until Nondumiso Shangase and Nonkululeko Mlaba both made their debuts for the Proteas this year.

Coach of the side Denesha Devnarain is excited by the involvement of a company like Hollywoodbets.

“Our team has never had a sponsor let alone had a season launch,” an excited Devnarain said. “The confidence that comes from having the backing of a sponsor is something that cannot be coached. It’s given the girls more belief that there are people believing in them.”

It’s going to be a tough season in the top six for the first time but with five Proteas in the side Devnarain is confident they can do well.

“Obviously we would love to come first this season but we have set some realistic goals and we feel that we can finish in the top three.

“We would be disappointed if we finished in the bottom two,” she added.

Former KZN cricker Trisha Chetty has returned to the province while speedster Shabnim Ismail has shifted to Hollywoodbets KZN Coastal.