Sharma and Rahane continue to call tune for India 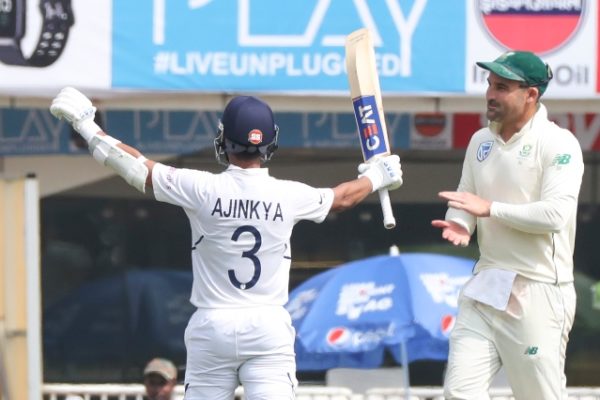 20 Oct Sharma and Rahane continue to call tune for India

INDIA had a near perfect second day to the final Freedom Series Test match against the Standard Bank Proteas at Ranchi on Sunday when Rohit Sharma and Ajinkya Rahane both achieved further personal landmarks and the home side then dismissed both the South African opening batsmen cheaply.

Their only disappointment for India would have been the fact that most of the final session was again lost to bad light, but the home side still held an overwhelmingly strong position, having declared at 497/9 and then reduced the Proteas to 9/2 by the early close.

India scored 133 in the morning session and a further 111 in the second.

Rahane achieved his 11th career Test century before being dismissed for 115 (192 balls, 17 fours and a six) and having extended the fourth wicket record partnership with Sharma against South Africa to 267.

But Sharma was not finished and shared a further partnership of 64 for the fifth wicket with Ravendar Jadeja en route to his maiden double century in this format, having previously made double centuries in white ball cricket as well. It also took his series aggregate past the 500-run mark.

There were several useful partnerships to follow from the lower order including a 13th career half-century from Jadeja.

The two South African debutants had something to celebrate with George Linde take 4/133 in 31 overs and Heinrich Klaasen having a hand in four dismissals including a stumping.

Remarkably, the innings included as many as 13 sixes.

There was only time for 5 overs before the early close with the two seamers, Mohammed Shami and Umesh Yadav, being allowed only one each before spin had to take over in deteriorating light but it was enough for each to claim a wicket to make the mountain for the Proteas to climb look steeper than ever.