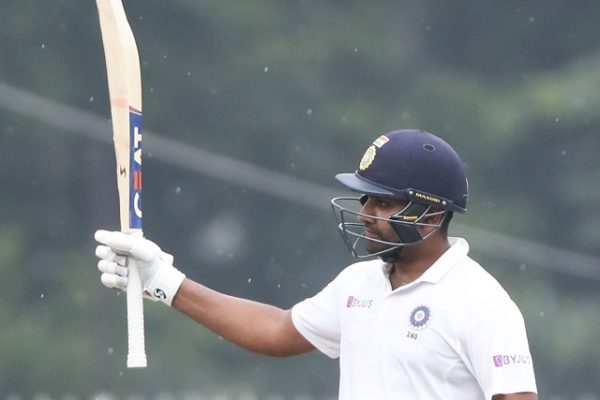 ROHIT SHARMA batted India through a difficult new ball period after Virat Kohli had again won the toss to score his third century of the series and put his side on the way to another substantial first innings total against the Standard Bank Proteas on the opening day of the final Freedom Series Test match at Ranchi on Saturday.

Sharma finished the day unbeaten on 117 (164 balls, 14 fours and 4 sixes) for his sixth career century and in the process took his series aggregate past the 400-run mark. His partnership with Ajinkya Rahane for the fourth wicket – so far 185 runs in a little more than 42 overs – was also an Indian fourth wicket record against the Proteas, improving on the 178 that Rahane and Kohli had put together in the previous match at Pune.

It gave India a total of 224/3 in only 58 overs when play was abandoned for the day following first bad light and then rain.

It was a day’s play of two distinct halves with a new-look South African side – there were five changes from the previous match – having an outstanding opening session when Kagiso Rabada set the standard with good support from Lungi Ngidi and Anrich Nortje to put India back on their heels at 39/3 midway through the session.

They maintained the pressure through to the lunch break, taken at 71/3, and it could have been even better had Zubayr Hamza managed to hold on to a reflex catch at short leg from Sharma in new cap George Linde’s opening over.

But it was a different story for the remainder of the day with Sharma and Rahane accelerating to a scoring rate of almost 5 to the over to put on 134 off 29 overs and then a further 19 in the 6 overs that were possible in the evening session.

Sharma had been restricted to what was by his standards a moderate rate of scoring initially to need 85 balls to record his half-century and it was Rahane who first took the game away from the South African attack.

His half-century came almost at the rate of a run a ball as he plundered the leg-side boundary before he finished the day on 83 (135 balls, 11 fours and a six).

Rabada (2/54 in 14) and Nortje (1/50 in 16) were the pick of the attack and the only wicket-takers. Linde had a solid debut (40 runs in 11 overs) but Dane Piedt was again targeted, and the South African spinners only managed a single maiden over between them.

The most significant change to the Proteas line-up was the decision to move Quinton de Kock up the order to open the batting, and Heinrich Klaasen, who joined Linde as a debutant, taking over the wicketkeeping duties.

Two of the changes were enforced by the injuries to Keshav Maharaj and Aiden Markram while the others to drop out were Theunis de Bruyn, Senuran Muthusamy and Vernon Philander.

Klaasen and Linde become caps number 104 and 105 respectively to represent the Proteas in the red-ball format.