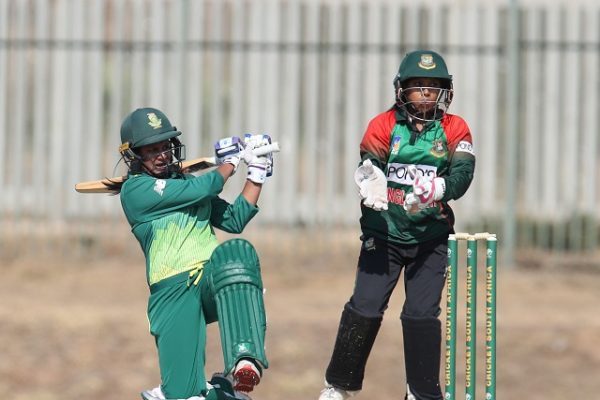 Half-centuries from Trisha Chetty and Tazmin Brits set up the South Africa Emerging women’s narrow, five-run win over Bangladesh Emerging in the opening of their three-match T20 series at Hammanskraal Cricket Club on Wednesday.

The home side put 130/4 on the board after being asked to bat first. The pair shared a 127-run opening stand which carried them all the way to one ball shy of 19 overs when Khadija Tul Kubra (1/21) struck with the first wicket for her team, bowling Brits out for 52 off 55 balls (3x4s, 1×6). Chetty joined her back at the hut just two deliveries later when Ritu Moni (2/30) struck off the first ball of the final over, ending an electric innings of 72 runs from 59 balls, which included nine boundaries.

Captain, Nadine de Klerk was once again stumped without scoring as South Africa scrambled to add a few more runs to their tally, followed by Anneke Bosch who was run out for two off the final delivery of the innings.

The visitors gave it their best shot but this time, it was the hosts who held their nerve for the win. Tumi Sekhukhune once again starred with the ball, taking 3/21 as she chipped away at the top order. Fahima Khatun (34) and Sanjida Islam (21) were the only two who succeeded in posting scores of 20 or above, while Moni (19) gave fleeting hope to her side with a 10-ball knock of 19.

South Africa’s bowlers continually chipped away at the batters however, and took wickets at regular intervals, not allowing them to settle in. Nonkululeko Mlaba (1/16), Ayabonga Khaka (1/20), Evodia Yekile (1/23) and De Klerk (1/24) all claimed a scalp each as they restricted Bangladesh to 125/9 in the end.

Trisha Chetty was named the Player of the Match.

It will be a quick turn-around for both teams with their second match taking place tomorrow at the same venue. Victory for South Africa on Thursday will see them take an unassailable lead in the series as they look to make up for their One-Day series disappointment.