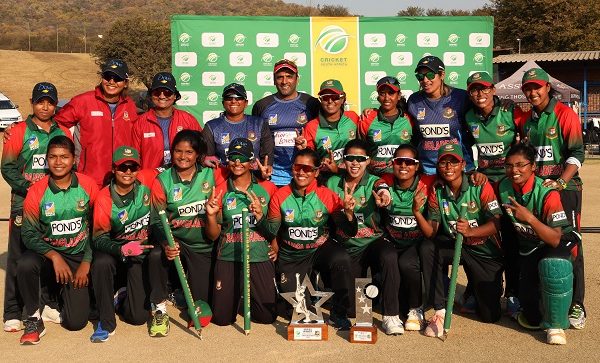 Sharmin Akhter and captain Nigar Sultana shared a 104-run, second-wicket stand, leading the Bangladesh Emerging women to a nine-wicket win over South Africa in the One-Day series decider at Groenkloof Oval in Pretoria on Sunday. The visitors take the three-match series 2-1.

The pair returned respective, unbeaten scores of 83 and 48 in their chase of South Africa’s 176/7 and reached their target with 32 balls to spare, with just the loss of Murshida Khatun who was run out for 31 at the back end of the 18th over.

Things looked different on the home team’s scorecard. They were put in to bat first after the tourists won the toss. Robyn Searle and Tazmin Brits once again got their team off to a good start, adding 64 for the opening stand before the latter was caught and bowled by Fahima Khatun (3/32) for 23 (45 balls, four fours) in the 15th over. Searle (35) was unable to kick on from there, departing in the following over at the hands of Khadija Tul Kubra (2/34).

Trisha Chetty continued her good batting form as she notched up a second consecutive half-century before Khatun struck again, this time trapping the wicket-keeper leg before for 63 off 86 deliveries, including five fours. The rest of the line-up once again failed to show up. Only single figure scores were managed, with the exception of the captain, Nadine de Klerk who scraped together 17 from 33 balls before Khatun added her name to her wicket column.

South Africa will hope to bounce back in their three-match T20 series which starts on Wednesday, 31 July 2019.