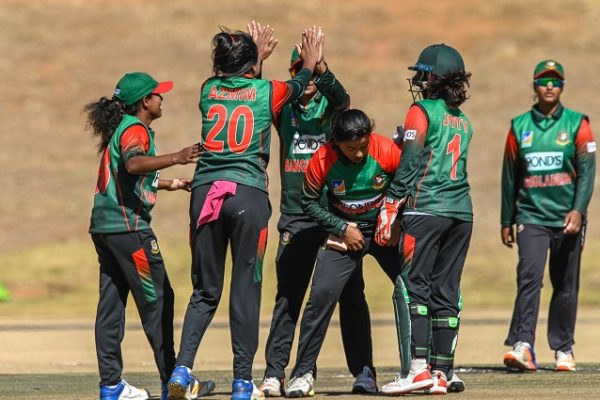 The Bangladesh Women’s Emerging team beat hosts, South Africa Emerging by four wickets to level the three-match, One-Day series one-all in Pretoria on Thursday. The series is now perfectly poised for an exciting finish when the sides meet for the decider on Sunday, 28 July at Groenkloof Oval.

The visitors successfully chased down their 239-run target with eight balls to spare thanks to solid batting by the top and middle orders.

South Africa won the toss and elected to bat first, posting 238/9 at the end of their allotted overs. They got off to a superb start when Robyn Searle and Tazmin Brits shared a 155-run opening stand, laying a good foundation for the remainder of the batting order to continue on and make a big total. The pair narrowly missed out on deserved milestones. Brits was the first to go, losing her wicket on 45 in the 31st over, followed by Searle who fell just four runs short of a century just one over later. The latter was trapped LBW for a hard-fought 96 off 111 balls, including 13 fours.

Trisha Chetty stepped to the crease at number three and showed her experience, playing a polished innings which saw her score 56 from 58 deliveries (8x4s). Disappointingly, that was the last noteworthy knock of the innings. The rest of the line-up were dismissed for scores in the single digits. The hero of the previous match, captain Nadine de Klerk, was dismissed without scoring after she was stumped off Khadija Tul Kubra, who was the chief destroyer, taking 4/42 in her 10-over spell.

The visitors showed a lot more composure in today’s fixture and, while no one managed a half-century or more for their team, a number of good contributions by Murshida Khatun (48), Ritu Moni (42), Shaila Sharmin (31), Sobhana Mostary (29* off 18 balls), captain Nigar Sultana (29* off 24) and Fahima Khatun (20) saw their side to a comfortable victory in the end.

South Africa’s bowlers struggled to get breakthroughs. De Klerk (1/34), Tumi Sekhukhune (1/49) and Anneke Bosch (1/53) could only return a wicket each, while run outs by Ayabonga Khaka, Sekhukhune and Bosch accounted for the rest of the dismissals.