Dean Elgar and Thando Ntini of the Titans

Momentum Multiply Titans coach Mandla Mashimbyi insists there will be no extra pressure on his team when they take on the Hollywoodbets Dolphins in their top-of-the-table 4-Day Domestic Series encounter at SuperSport Park in Centurion from Sunday.

The two teams top their respective pools after two wins and a draw from their opening four matches of the 2020/21 campaign, but the stakes are now high as the competition moves towards the business end.

“There’s still two more games to be played after this one, so you cannot see it as pressure but rather as a challenge that you’re going to have to face and make sure you do everything in your power to try and come out on top and victorious at the end of the day,” the Titans boss stated.

“We know they’re a tough unit. They showed it last year and (coach) Imraan (Khan) has obviously started something good there. They’re definitely a force at the moment and we’re not going to underestimate what they bring.

“We just have to make sure we look after what we’re meant to and tick all our boxes. Hopefully that will help us bring the ‘W’ home.”

Mashimbyi’s side beat and drew with the Six Gun Grill Cape Cobras in two of their games, whilst also overcoming the Warriors and losing to them in two matches against the Eastern Cape franchise.

It has left them in a good position at the top of a congested table.

“We’re happy with where we are sitting,” the coach said. “I think we could have been in a bit of a better position still, but that’s how it goes.

“Sometimes you’re in the game and sometimes you’re not, you just have to learn from those experiences and make sure you cover all those gaps that were open.

“We’ve tried to do that this week and now it’s about making sure we get our intensities up and take that into the match against the Dolphins.”

Both teams will also welcome back their Proteas players for the fixture and Mashimbyi added: “It’s always great to have them back, it brings a new energy and hopefully they can produce the goods both on and off the field as well.”

Meanwhile, opposite number Imraan Khan watched his team win big against the Imperial Lions and also beat the VKB Knights for their two wins. They also lost to the Central Franchise and drew with the Cobras in the first four rounds.

“It’s been a good positive start for us,” the Dolphins coach said. “We always wanted to start the competition strongly and it’s something we spoke about extensively leading into the season. And I’m really encouraged by what the boys have done so far.

“I’m backing them to continue that trend this week. The Titans are a good and strong team. They’ve been a successful franchise for a very long time, so we’re expecting a tough tussle and will have to be up for it.”

As for the points that are at stake, Khan was adamant that every game was key at this stage of the campaign.

“I think every match is important,” he concluded. “If you look at the log for our pool, it’s extremely tight. Every game is pretty much like a final we’ve just got to make sure we up for the contest on every single day.” 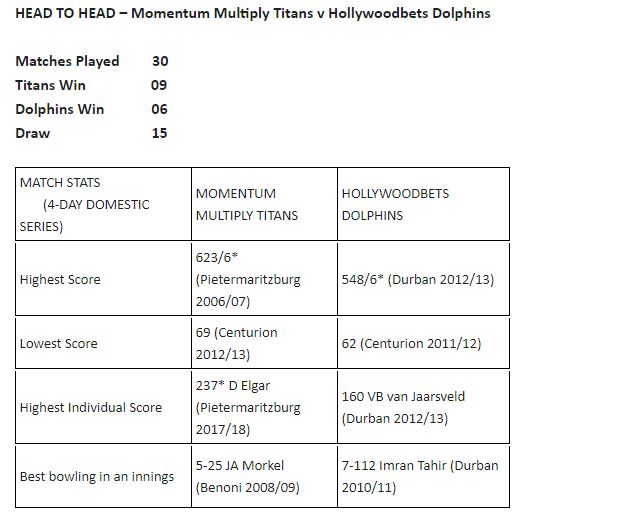