VKB Knights coach Allan Donald is confident his players can return to winning ways when they return to their fortress of the Mangaung Oval in Bloemfontein for their next 4-Day Domestic Series outing against the Imperial Lions starting on Sunday.

The Central Franchise began the 2020/21 campaign with successive wins at the same venue, before back-to-back losses on the road.

They lost to the same Lions team in Johannesburg in round three and followed that with a round-four loss to the Hollywoodbets Dolphins in Durban in their most recent game. Before that, they beat the Warriors and Dolphins in the Free State.

“After two games we were sitting really pretty, the confidence was high and then things turned around in one session at the Wanderers,” Donald said. “We saw after that how things went, followed by the knock-on effect in Durban.

“We were okay in Joburg, but then really poor with the bat in Durban. I think the break for us has come at a really good time. We carried a few niggles and tired bodies after the last round, so it gave us some time to lick our wounds a bit.”

What the defeats have done is made the log standings extremely tight, with just over six points separating the Knights, Dolphins and the Lions in Pool A.

Adding further intrigue to round five is the return of the Proteas to all the teams.

“We now have the captain Pite van Biljon back and we look forward to that,” Donald added.

“Unfortunately Gerald Coetzee is out until next year and we’re still missing Jacques Snyman. Jonathan Vandiar is out, so we’ll have to regroup a bit.

“But I have no doubt we will bounce back hard. Off course the Lions will have all their internationals back as well, which just spices up everything coming to Bloem. And I reckon this will be a heck of a contest starting Sunday.”

Donald said he was also extremely encouraged by the standard of play in the competition, saying: “Both pools are really tough and it’s so good to see the spread of talent that is around South Africa at the moment. Also the type of cricket that everyone is willing to play, that really excites me as well…that attitude is great and I’m liking what I’m seeing.”

Lions coach Wandile Gwavu, meanwhile, has seen his defending champions progress well following a tricky start to the campaign when they lost to the Dolphins, but they are now unbeaten in three, including two wins.

“We’re in a decent position if you look at where we started off,” the coach said. “The first two games things didn’t go our way, but after that we’re lucky enough that we managed to get the right results and we’ve now got ourselves back in contention to challenge for the top spot.

“In saying that, there is a long way to go and our focus remains on trying to improve in each game we play, try to master the basics and play the best cricket we can play. We are excited to come to Bloem.

“We know the Knights have done really well there before, so we will respect them. But we’ll be looking for a positive result once more.”

Gwavu has a huge selection dilemma ahead of him. All his Proteas, barring Temba Bavuma and Kagiso Rabada, are back, but he must find space for them amongst a young team has been producing positive results.

He added: “It’s a good headache to have. We have some world-class cricketers coming back and it’s always good to have them in the mix.

“They’ve done very well in the past and are tried and tested players. I’m very happy with the way the youngsters did when they were not around and they’ve just made things tougher. That is exactly how it should be for a coach and I’m looking forward to it.”

The Imperial Lions squad is: To be confirmed 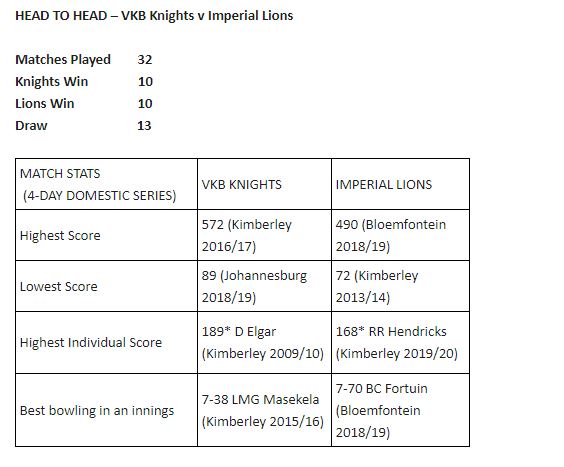