Momentum Multiply Titans coach Mandla Mashimbyi has hailed the impact of the Proteas on their 4-Day Domestic Series campaign thus far saying their presence has been hugely influential as they ready themselves for round three against the Warriors starting on Monday.

The match will be the first at home for the Centurion-based outfit after playing the first two rounds of 2020/21 on the road.

They started the term by edging out the Six Gun Grill Cape Cobras in Cape Town thanks to centuries by Dean Elgar and Theunis de Bruyn in a match they were playing catch-up in most of the way. The former was again a key player alongside match-winner Tabraiz Shamsi away at the Warriors in round two.

“The Proteas have brought a lot of experience and lot of knowledge,” Mashimbyi said. “It’s helping the changeroom greatly and building the franchise in ways you cannot even imagine in terms of what they are doing for those around them.

“It’s been wonderful to have them around.”

Summing up their start thus far, the Titans coach believes they have been on the money.

“If you think about it last year, we only won two games, so if you look at it that way it’s been an extremely good start,” he reflected. “You’ve got to commend the boys in terms of how they conducted themselves in the two games. Yes we’ve dropped the ball at times, but we’ve managed to come back and navigate through tough situations.

“It’s nice to see that happening so early in the season. But we know it is still the beginning and there is a long way to go. What’s happened in the first two weeks is history now and the next page of the journey is what we’re now looking forward to starting from Monday.”

Even though they beat the same opponents in the previous round, Mashimbyi knows things could well be different at SuperSport Park.

“We respect every team we play against and it will be no different against the Warriors,” he said.

“We do understand that they started slowly, but that doesn’t mean they’re out of it.

“We’ll have to be wary and just make sure we tick all the boxes from our side and carry out the processes as we plan to. It will be our first home game as well and we want to start it well.”

Opposite number, Robin Peterson, admitted that it has not been a good start for his team, but feels they have the capability to bounce back.

“It’s been a bit of a chaotic start, we were hit with Covid-19 and then we only had 12 players to pick from at the start, so a little bit chaotic at the start.

“We were a little bit in an unfortunate position where we’ve had to pick different teams. We haven’t had a settled line-up for either of the two matches so hopefully now we can start settling down a little bit. Because everything is about stability in four-day cricket and we haven’t had that.

“In saying what I have, it isn’t an excuse, but we know what we need to do. Guys are still training well and part of cricket is being resilient and overcoming these obstacles. The attitudes have been good and I can’t fault them. Hopefully there will be a reaction this week.” 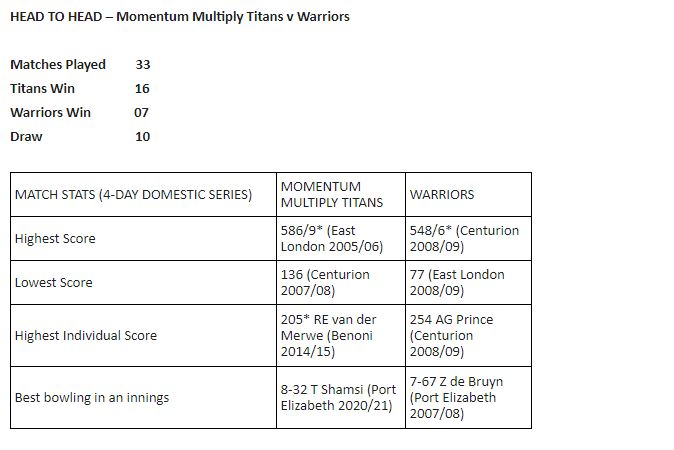