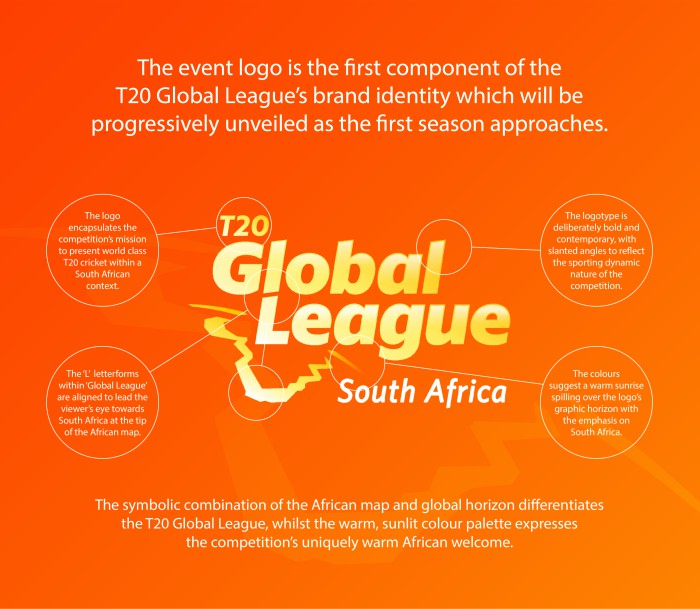 
Cricket South Africa (CSA) today announced the name of the South African T20 league to debut in the last quarter of 2017, with eight participating teams consisting of local and international players. The T20 Global League – and its associated logo – were unveiled to much hype and international sporting industry excitement at the Wanderers Cricket Stadium this evening.

Previously billed as the #T20 Global Destination League, the name was shortened to T20 Global League. The logo, depicting the African continent along with the radiance on South Africa, replaced the word ‘destination’ with a visual reference. The logo was designed to visually position South Africa as the destination for global T20 cricket, and draws on the colours of an African sunrise: a hint of red on the horizon radiates a golden glow over the continent, with the brightest point highlighting South Africa.

“It is our duty as Cricket South Africa to safeguard the future of the game. By backing a high-value tournament like the new T20 Global League, and investing in synergistic partnerships with key stakeholders, the T20 Global League is perfectly positioned to become an internationally successful sporting event,” says CSA President, Chris Nenzani.

“Fans can look forward to epic game experiences, complimented by action-packed stadiums, big entertainment, top class broadcasters and accessible ticket prices. We can firmly say that the era of ‘sportainment’ has dawned upon us. It’s now South Africa’s time to capitalise while reigniting and celebrating our love for the game,” said CSA Chief Executive, Haroon Lorgat.

The eight successful Team Owners will be announced on 19th June in London alongside the eight allocated Marquee players announced previously. The process of applying to own and operate a team opened on 4th February with more than 150 expressions of interest that will be narrowed down to just eight.

The new T20 Global League Logo also received the thumbs up from Protea stars in the UK.

“We are counting the days to this wonderful tournament and excitement is building within the Proteas camp and I know of a few international players who can’t wait to get in on the action.”

“The excitement levels are starting to rise and the anticipation of a world class T20 League in South Africa is a surreal feeling,” said Miller.

“Now that this awesome logo and tournament name has been revealed, we are definitely counting down the weeks ahead of the first ball of the T20 Global League.”